Difference between revisions of "Companions"

Companions are characters whom you invite to join you on your journey through the Exiled Kingdoms. Upon joining, your companion will follow you in your travels and assist you in attacking enemies. There are four types of companions: main, hired, summoned and quest.

Main companions are those that the player gets access to as a result of story or quest development. They do not die in battle but merely fall unconscious until all enemies around them have been defeated – at which point the companion regains consciousness and a small portion of their health, and begins to follow you again. As they journey with you they will gain experience and level up but you will gain 20% less experience as a result of their assistance. As well as being a helping hand, you can also equip your companion with weapons and armor to improve their damage, skills and their ability to survive. Potions, equipment and scrolls can be applied to companions (within the limits imposed by the class of the companion). Currently, there is no way to train a companion's Advanced Skills.

Unlike the player, main companions only receive one skill point and one stat point when levelling up – so use the skills wisely (although there are NPCs who will offer to reallocate your companion's skills). You can only have one main companion follow you at a time. Pressing the Extra Recovery skill will restore the companion's health completely (as it does for the player). If a companion is lost or left behind they will reappear when the player moves from one map to another. If a player has acquired their own house in New Garand dismissed companions will return to that house (in addition to the location in which they originally resided).

There are three characters who can become main companions:

To assist with strategy in various situations, main companions can be given orders to behave in a certain way. For example the following demonstrates the options available to control a companion during upcoming battles: 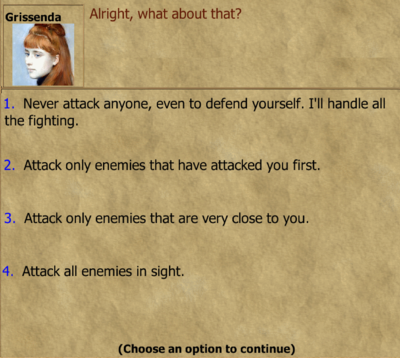 Battle Orders for the companion Grissenda

Hired companions are those who will join the player for a limited time and for an arranged fee. Such companions are encountered in most towns and sometimes as a player travels between towns. The following shows a typical interaction needed to acquire a hired companion (although the fee can vary greatly):

The procedure for getting help from a hired companion.