Difference between revisions of "Item Drops"

One of the core aspects and motivations of playing Exiled Kingdoms (as well as many other RPGs) is the search for better equipment, either through looting chests in the deepest dungeons or collecting drops from countless enemies slain on the way there. While some unique or rare items can be obtained for sure at pre-defined locations or through specific quest actions, there are others which will only drop by chance. Trying to obtain those often requires patience and endurance (or a lot of luck), with some frustration being almost guaranteed for the rarest among them. To find some comfort, it may help to make oneself aware of the underlying drop mechanisms and the resulting statistical oddities.

Every container or enemy has a certain list (the so-called loot table) of items that may potentially drop (except for some enemies which in fact drop nothing). A certain drop chance is attributed to each of these items, ranging from 1% (for the rarest items) to 100% (for sure drops). Once a chest is opened or a dead enemy looted, the corresponding drop table is evaluated from top to bottom, throwing dice for every item and adding every successful toss to the actual loot. However, there is a maximum number of items (1-4) per loot, so it may happen that items at the bottom of a long loot table may never get evaluated if this limit is already reached. Therefore, the true chance for obtaining such items is even lower, especially if the items above have a rather high chance of dropping (thus having already filled the loot bag).

What exactly a certain drop chance means for the number of attempts a player needs to get a specific item may be better understood by looking at the corresponding statistical results, i.e. the binomial probability distribution. In the graph below the probability for finding a certain number of items after 100 attempts (i.e. 100x looting a container or a dead enemy) is shown for 4 different drop rates. 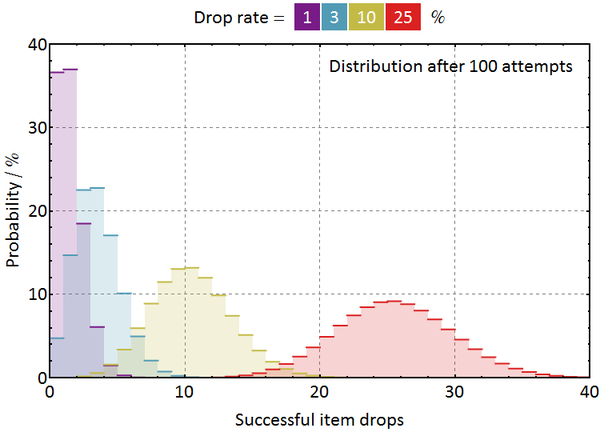 As would be expected intuitively, the distribution for moderate drop rates (10% and 25%) is quite symmetric, centered around the average values of 10 and 25 items, respectively. But for lower drop rates the distribution gets more and more asymmetric, with increasing probability of having zero drops. So for a drop rate of 3%, almost 5% of all players will have no item after 100 attempts. This number rapidely increases for the rarest of all items (1% drop rate), for which more than one third of all players will have empty pockets after 100 attempts. And that's without taking into acount the loot table effects described above!

Instead of looking at how many items one gathers after a certain number of trials, we can also ask how many attempts are necessary until the chance for getting zero drops has vanished below a certain threshold. This is shown in the graph below. 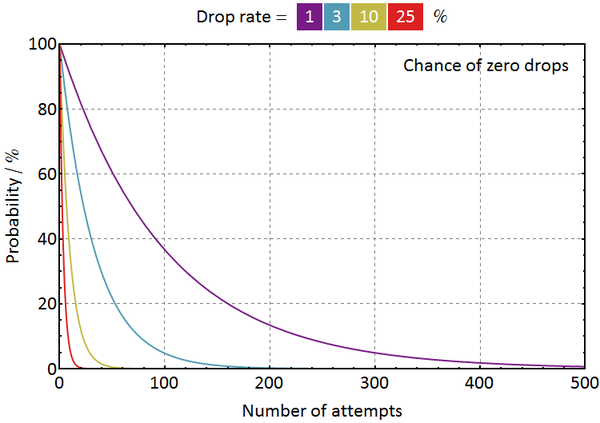 For an item with a 3% drop rate, the probability for finding nothing nearly vanishes at around 200 attempts. However, for a 1% drop rate, it may be necessary to have 500 trials or more. Also keep in mind that even if only 1% probability of zero drops is left, as Exiled Kingdoms is played by hundreds of thousands of players, this means that there are still thousands of unlucky players out there.

For those, the only thing we can say is: It's not your fault, it's also not a bug, it's just life. So don't lose all hope and try harder. Fortune favors the bold.