Levels are the main element for indicating the progression of the player character. Every new character starts at level 1 and evolves by earning Experience Points (XP) through various actions in the game, like defeating an enemy, solving a quest, disabling a trap, etc. Upon reaching certain XP thresholds (see table to the right) the level is incremented. As of version 0.9.991, the level cap has been removed. Beyond 25, every subsequent level requires 1,000,000 additional XP.

When a level is gained, the character receives the following bonuses:

When companions level up, they receive only half the benefit:

To get an idea of the efforts necessary to level up, the graph below displays the number of enemies of the same level as the player character that have to be defeated to reach the next level. For example, you only need to kill 43 level 1 creatures to reach level 2, but 600 level 24 enemies (which admittedly are rather limited in the current game) to make it to level 25. 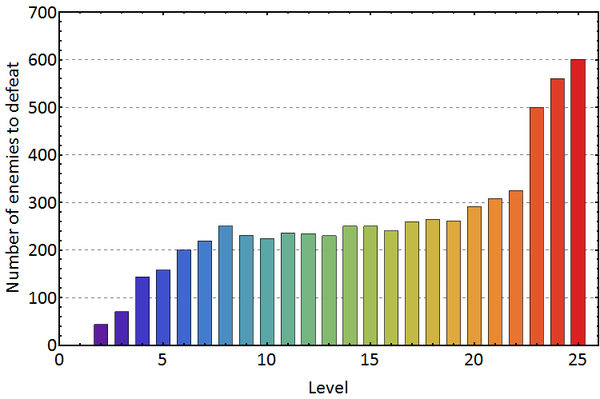 The main story of the game is designed to be completable at around level 20. After this point, all subsequent levels are considered as epic and therefore necessitate much higher efforts.