This is the Mage - "Elementalist" build by Owns

(See Notes section below for more detailed guide/tips using specific skills. This build is written for getting through the main story line of the game and has not been tested yet for Sewer of Horrors. I will later update with thoughts on SoH and an optimized level 23 or 25 build.)

Some Game Stats: (full details can be found in this thread)

This build will rely on spell casting for most of the damage. It requires lots of mana and you will be fragile. It is probably not the easiest mage build to play. You will have to be aggressive, focusing on killing before getting killed. Hit and run will be a common tactic. You should pay attention to enemy resistances/weakness and exploit their weaknesses using elemental damage from both your wands and your spells. The reason I favor Wand of Storms is for the Stun2 attribute. That, combined with Grissenda's Bash III will keep enemies stunned for long durations, giving you plenty of time to either wait for spell cooldowns, or not even use spells at all when you want to conserve mana. It also doesn't cost mana to use, but switch to another wand (even Arcane wands) when it makes sense for a damage boost, for example to exploit weaknesses or banish outsiders. Also, bosses tend to have high Stun resistance and you'll have better luck stunning with Lightning Bolt, while the extra damage from another wand will add up in a long boss fight. Though stun is almost always more beneficial than the added damage, you can start with the Wand of Storms and gauge how often it'll stun (look at combat log for stun chance if the boss resists). If it won't work out then switch to an arcane rod.

Along with exploiting elemental weaknesses, spatial awareness and making the best use of your surroundings (narrow halls, doorways, corners, alcoves, and small rooms) are the keys to making the most of this build. You will want to fight in areas that allow your spells to hit as many enemies as possible, as many times as possible. You'll want to always think about damage per mana cost for good management of your mana and judge whether its worth spending on spells or if it might be better to just knock enemies down slowly with wand attacks, depending on the situation.

Implemented properly, you should be able to finish the main story of the game by level 20-21 without too much trouble on Hard difficulty. Killing large groups of enemies at the same time will be the norm, sometimes entire camps or rooms with 1 or 2 spells as you get stronger. Undead will be an actual joke, furry animals and hobgoblins will easily succumb to your Fireball, goblins will be decimated by your Ice Storm, and none will withstand your Lightning Bolt (drama out of my system now). You will however find yourself most vulnerable to archers (stick behind Grissenda and let loose with your spells). Also you will have a tougher time against enemies with high armor and resistances as well as high damage like Vorators and Earth/Iron golems. 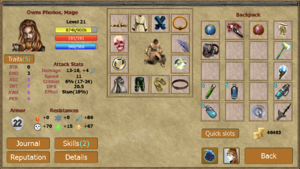 I will try to give some specifics on progression, but it will mostly be general advice to follow. I will also assume that you have found and used some Ancient Tolassian Tomes (but not all, give some to Grissenda), so if the trait points don't add up, that's the reason why.

First remember that your main source of mana will be Intellect (INT), while Personality (PER) gives half the amount of mana. Since this isn't a summoner build, the main reason we want PER is for mana (and some dialogue trait checks). Just remember that the trait points cost for increasing INT from Lvl 3 -> 4 is 4 points, which is more than it costs to increase PER from Lvl 0 -> 2 (3 points). So this is what I call a tradeoff point and it makes sense to favor PER at that point. The next tradeoff happens at INT 6->7, while PER 2->4 will cost the same (7 points). It's better to add PER here for the added resistances, gossip, and more trait check options.

As for damage, since this build will utilize wands, Agility (AGI) is our main source of attack damage (other than spells of course) while Awareness (AWA) gives half the ranged damage. AGI will also add armor to make you more durable. Similar 'tradeoffs' apply for ranged damage, AGI will trade off with Awareness (AWA) at the same levels as INT with PER. Finally, AWA Lvl 3 will add one more armor which is useful for a fragile mage.

Side Note: The first time you meet the Travelling Alchemist, purchase 3 Living Ice from him, it'll make completing the Important Research quest at Inori Enclave much easier. He won't carry Living Ice again for a while, but always carries it on the first encounter from my experience. You can obtain Living Ice elsewhere later, but much easier this way.

Over the next levels, prioritize in the order listed below (using Ancient Tolassian Tomes but remember to give some to Grissenda as well). This is mostly from my own memory/reasoning so don't follow it exactly if you prefer re-ordering things. Feel it out as you progress:

She will be your main companion. You want Grissenda to be strong to keep you safe so give her some Ancient Tolassian Tomes. Mage will level up quickly due to xp boost from intellect, so try to equip her with an item with Wisdom whenever possible and use scrolls of wisdom on her before doing dungeons, town hall quest ventures, rumor bosses, placing shards, and other things that give major xp. You should use scrolls of wisdom on yourself as well but I usually prioritize Grissenda if only one scroll is available. You can also donate at an Altar of The Three for an xp boost, but Grissenda can't. When I was level 20, Grissenda was level 18 with the following build:

She should use a shield/sword, go for highest armor you can find. Her top priority is staying alive, then dealing damage. Mostly Light weapons for best damage with this build, sometimes Hand weapons when certain attributes/elements were needed. This build will make her very powerful with both good damage and high survivability. You might be surprised how long she can survive with just a sliver of health left. The reason I like Cleave for this build is because this mage build focuses on hitting multiple enemies at the same time whenever possible; Cleave will help mow them down faster, and also help keep them attacking Grissenda (hold aggro) rather than chasing after you. Unless you're starting a long battle, keep her health low to make use of Fury. Potion of the Tragic Hero works great with Fury and will turn her into a monster. Let her die near the end of a fight and get back up with half health before moving on when possible (sorry Griss!). This way you'll conserve health potions and Recovery.

Here I will explain some strategies for making the most out of this build and your spells.