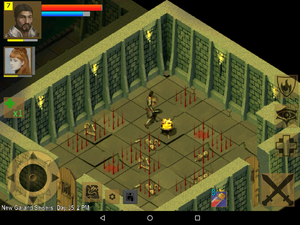 A trap room in the sewers.

There are four major islands in the sewers of New Garand (City), and three entrances from the city above. On the southwest island lies the Seventh House guildhall. On the northwest island there is a merchants Butterfingers and Liliana. On the northeast island, the one without a sewer entrance, there is a trap room with all traps. On the southeast island there is the Unknown Dungeon and a quest item for Where Did I Put My Sword....

There are 2 Secret Doors in this area.

Scrolls of Recall & Teleport, and Gate, do not work in this area.

Sir Mason's Longsword (for quest Where Did I Put my Sword...), Thief's Blade

Imperial Copper Penny (for quest Welcome to the House)

2x Emerald, The Orb of Shadows (for quest A Mad Wizard)

The following Trait checks are associated with this area. Those marked with

are mandatory for achieving certain outcomes or rewards which can not be accomplished otherwise.