Difference between revisions of "Prisoner of Orcs" 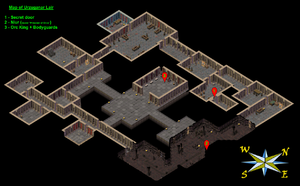 Map of the Lair including Niur's location

Prisoner of Orcs is a quest given to you by Usham Arok at his cabin in Southern Bluemist River.

Usham is a lumberjack working in Southern Bluemist River. He and his fellow men have been constantly plagued by orcs, even one of them, Niur, being kidnapped. If you can find their lair, perhaps Niur is still alive and can be rescued.

The Southern Bluemist River has plenty of trees, and many lumberjacks work here sending lumber to New Garand. The orcs in the area often cause problems, attacking the men, forcing knights to be summoned to handle them. Even though the knight destroy nearby orc camps, Usham the lumberjack is convinced they have an underground lair. He tells you if do explore the lair to keep your eyes out for his friend, Niur, who was kidnapped some weeks back. Orcs keep prisoners for their mines, so there is a chance he is still alive.

While the lair is located in Southern Bluemist River, it is on the other side of the river. From Usham's cabin, head back to Kingsbridge and out the southern exit. Head east out of the area, and locate the entrance to the lair. Kill the orc inside, head through the door, and take out the two orcs. Heading north will lead to the eating area, which is packed with orcs of various levels. Instead, head east to enter the main part of the lair. A few more orcs, and your again given a choice of direction. Heading east across the bridge is a direct route to our goal but again a large number of orcs stand in your way. If you head south through the door, you will reach a lightly guarded hall that will eventually dead-end in the mines. Orc taskmasters are around keeping and eye on the slave miners. Niur can be found, typically in the middle of the area.

Your next task is to convince Niur you are not an orc tricking him again. It is apparent he has been held here a long time, and doesn't trust anything you say. Only by mentioning his friend, Usham, sent will he finally believe you and follow you. Now you must escort him out of the lair, through Kingsbridge, and back to Usham. Grateful to have his friend returned, Usham rewards with the Amulet of Forest and good reputation with the Varannari and Varsilia.