The Wizard's Guild maintain the Sagar Enclave in South Sagar Forest; additionally the Inori Enclave is adjacent to the capital, New Garand. 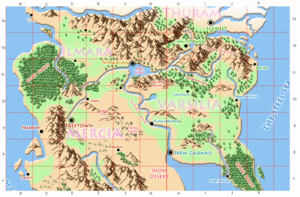 The Northern region of Varsilia, containing Sagar Forest and the Northern end of the Bluemist River. Groups of goblins can be found all over this region.

The central lands of Varsilia holding the capital city of New Garand and the castle of the Baron Andrys Storme. The coastline touches the Sea of Andor.

The mid-region of Varsilia. Groups of orcs have been roaming the roads as of late.

The oldest regions of Varsilia holding the port of New Anthur, the oldest village in Varsilia.